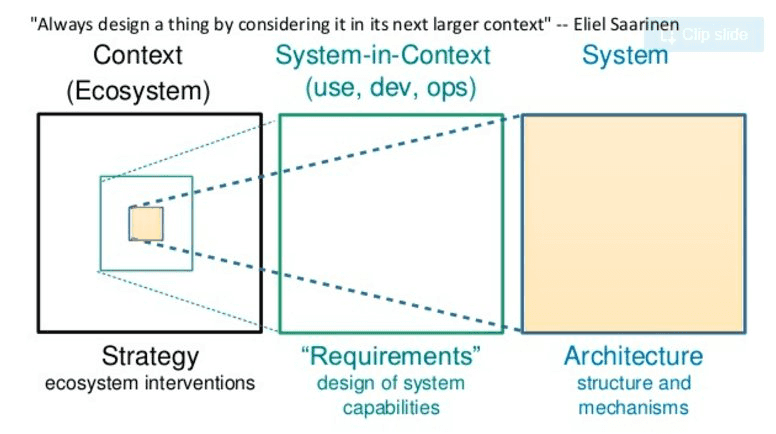 "Always design a thing by considering it in its next larger context." -Eliel Saarinen

I've been studying this diagram to try and glean some truths from it. It seems like there's some "deep structure" here that I would do well to elaborate.

First, an observation: Every system exists within a larger system. The act of drawing boundaries about what's "inside" a system and what's "outside" a system is more art than science. When we engage in design, we must decide what sub-system of the universal system of reality we're trying to model.

This diagram leverages that core idea: systems are always nested within other systems, to describe an artifact, be it a building or a software system, within its larger context.

When we speak about a system's architecture, whether we're talking about a software system or a building, we're usually referring to the inert materials, their relationships, and the "structures" we've created.

How does it work? How do the parts interact?

The activity at this level is "make it work."

Requirements of a system are an emergent result of the system in a context of use.

What should the system do within this context? Within any given context, a set of requirements emerge for the system.

The activity at this level is designing the system's capabilities.

I prefer the term ecosystem to encapsulate the entirety of all contexts of use for the system. Within any given ecosystem, there are a variety of contexts of use, or systems-in-context, some overlapping, some disjoint.

The diagram implies that strategy is most effectively applied at the level of the ecosystem. This is sensible, since systems-level interventions are most effective when they consider all actors.

How does this ecosystem relate? How do the various contexts of use interact with each other?

The activity at this level are systems-level interventions: changing the relationships between contexts, adding new contexts that create balanced feedback loops.

There are three levels of design when it comes to designing a system:

We can direct our design efforts within any individual "levels", but we will be most effective when we take into account the other levels.

Thus, "always design a thing by considering it in its next larger context."